To be fair, when deciding where to go on holiday, I didn’t actually pick Andalucía. In truth, Andalucía picked me. Our holiday plans kept getting pushed farther into the Fall and as we prefer vacationing in European destinations, the further into November you wander, the slimmer the choices. Now don’t get me wrong, Europe in the “shoulder season” as the travel pros call it has its benefits: hotel prices are lower, less cheek by jowl clustering at popular sites and just fewer tourists (particularly the cruise ship crowds and families) in general. However, the weather gets a bit more unpredictable and if your desire is anything “beachy” you will find signs with “closed for the season “in a variety of languages.

So, as I narrowed our choices, one particular location stood out…the mild and marvelous Southwestern corner of Spain – Andalucía. Nestled to the right of Portugal, balanced on that little spit of British curiosity called Gibraltar, looking over the strait to its Moorish past at Morocco, Andalucía was to be our home for two weeks.

And what a choice it was.  Two weeks just barely scratched the surface of an enchanting part of Spain where Christian, Jewish and Muslim cultures collide yet coexist in perfect harmony. And it has everything you could ask for as far as I’m concerned…cosmopolitan cities with cultural delights,

small towns nestled in gorges that take your breath away, miles and miles of green spoiled only by contented cows and charming ports that are always in season.

You can fly from the States to Madrid and then get a connecting flight to Sevilla (or any of the other larger cities in the area) or take the AVE “fast” train to Sevilla, Cordoba and Malaga (word is that Granada might be getting this service soon as well).

Once in the area, driving is a delight (not IN the big cities of course) and a necessity if you really want to experience the area as direct train and bus routes are not always available. Just be sure to have an International Driver’s License if you are not in the EU. (Americans can easily get it through AAA and it lasts six months). The reason being if you are stopped by the Spanish police for any reason and do not have it, you may face fines.

Our journey took us to from Sevilla to Cadiz to Granada to Cordoba and back to Sevilla with a few stops along the way like the breathtaking Ronda which is the bright star of the White Towns. We spent at least 3 days in each place which is just enough to get a feel for the place without feeling like you went through a revolving door. I do not recommend spending fewer than that in any of these cities.

Local wines are delightful (and seemingly free) and eat where the locals eat for the best taste of the region. I think we had Jamon Iberico with literally every meal. They bring the leg and carve at your table in a specially made contraption that I’m guessing in on every Spanish bride’s registry.

People were lovely, and ladies (all ages) were stylish and only American men wear shorts in the city. We are still mystified how an entire country can eat dinner after 10PM and still function the following day, but we fell into the rhythm and had glorious dinners that if we were home, we would be eating while watching The Tonight Show.

The weather did not disappoint with an occasional shower here and there but never enough to hamper dining al fresco past midnight on the Rio Guadalquivir or inhaling the salt air of the Atlantic on the Costa de la Luz. 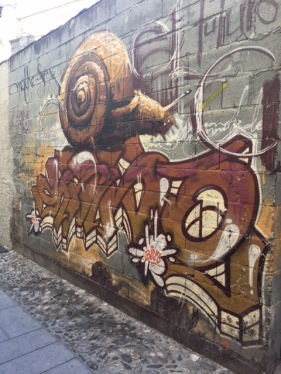 Often when we travel we wonder “could we live here?” and for Andalucía the answer is a resounding Si! The people, the food (and the wine), the spirit, the pace and the glorious autumn weather made for a holiday that we were sad to see end.

Postscipt on the Andalucían adventure:
– Córdoba was the surprise gem. Could move there tomorrow.
– Sevilla gave us a taste of Spanish living in a terraced flat. Loved every minute.
– Cadiz was a jewel of a coastal town that stays alive and hopping all year round.
– Granada…the Alhambra. Period. Rest of the city felt like it was all for tourist show.

This is a text widget, which allows you to add text or HTML to your sidebar. You can use them to display text, links, images, HTML, or a combination of these. Edit them in the Widget section of the Customizer.

This is a text widget, which allows you to add text or HTML to your sidebar. You can use them to display text, links, images, HTML, or a combination of these. Edit them in the Widget section of the Customizer.
Loading Comments...
%d bloggers like this: