As part of an Aer Lingus (why-not-visit-Scotland-in-February) package that included Edinburgh, we had a one day trip to the Highland Lochs, Glens and Whiskey Distillery. Generally not always a fan of these things but it was a bit of a dreary day so we figured let’s do it. At the very least a nice shot of Scotch whiskey will warm our souls at the journey’s end. Misgivings notwithstanding, this may have been the highlight of the trip. Since we were VERY off season our fellow tour passengers in our little Mercedes van was a ballet costume designer from London and well, the guide. This tour took us through the Central Highlands, the heart of Celtic Scotland. For this full day of delight we took in the waterfalls and velveteen green of the Hermitage Forest, the quaint hamlet of Dunkeld, the Victorian resort town of Pitlochry, a breathtaking view of the Queen’s View and the stunningly beautiful countryside around Loch Tay. And to finish, an enlightening tour of the Dewars Scotch Distillery, with a nip to warm your chilled bones. Trail Burners, Ltd.; +44(0)131 226 3133 https://www.rabbies.com/en/tour-scotland/one-day-tours-scotland-from-edinburgh/highland-lochs-glens-whisky-day-tour

Driving through the Highlands made it very clear why Queen Victoria fell in love with this enchanting land and built her beloved Balmoral up here.

From the rolling farm land to the snow dusted peaks (who knew there was skiing in Scotland) the slightly bumpy ride was spellbinding. You could almost see Rob Roy running kilted through the high grass.

Just about that time when the ride has lulled you into a nice little Zen state, our driver pulled into the quainter than quaint village of Dunkeld on the River Tay. 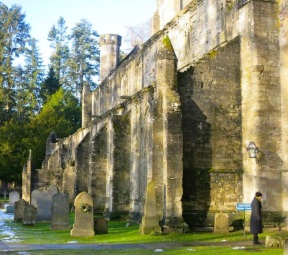 Its claim to fame was as the capital of the Christian Celtic Church for many centuries, the 13th century Cathedral the testament to this important station. Again, once you’ve visited even the most miniscule churches in Italy all others pale by comparison. And this one was no different. Its stoic history and stalwart charm is what gave it a certain aura in spite of its lack of Roman Catholic razzle dazzle. 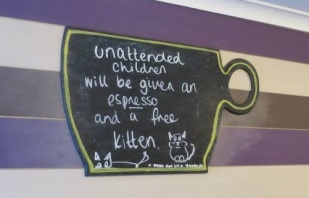 After a bit of brisk church walking, we meandered along the river into the village proper for an even more proper cup of coffee at Spill the Beans. A delightful and cheeky respite from the cold with good hot latte and even better sense of humor. 6 Cathedral St, Dunkeld, Perthshire

At the end of the High Street where it forks off from a square called The Cross, home to the slightly out of place, overwrought Gothic monument known as the Atholl Memorial Fountain in honor of the Sixth Duke of Atholl who left this earth in 1864. 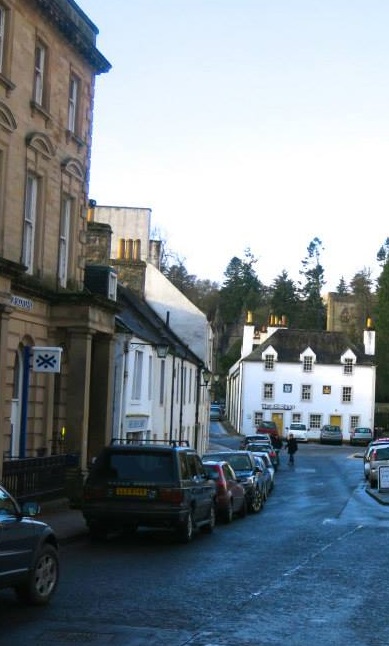 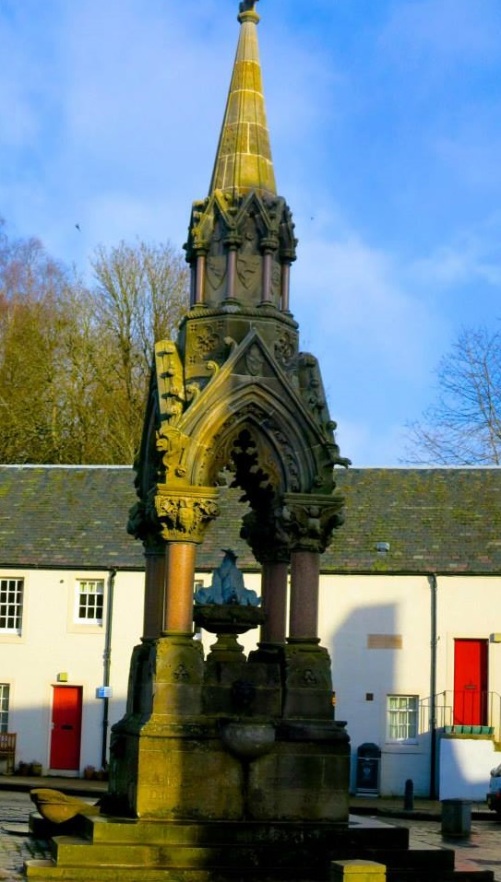 A short hop away we arrived at the Hermitage. Think of a magical forest of emerald flocked trees embracing the rushing River Braan leading to the Black Finn Falls spilling water diamonds to a soothing, whooshing soundtrack.

I had not expected much in the winter, but it was truly magical even with a bit of snow on the ground and spindly naked branches jutting out from the path. A favorite walk for the locals who bring their pooches to sample the smells of the forest. Truly enchanting.

After the walk in the woods it was time for lunch! On to Pitlochery a precious little hamlet with shops and such and most importantly McKay’s Hotel, Bar and Restaurant for one helluva fish and chips and brew eaten by the fire. 138 Atholl Rd, Pitlochry, Perthshire 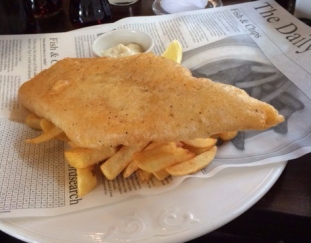 Fully fed we continued through God’s country more accurately called the High Country to revel in the beauty of the Queen’s View overlooking Loch Tummel all the way to the mountains of Glencoe.

The finale of the trip back to Edinburgh was the tour of the Dewars Distillery. To be frank, how it was made was mildly entertaining and the history of the Dewars wasn’t too shabby either. But really, in this cold all we wanted to do was partake of a little liquid heat at the end of the tour. Now personally my experience with Scotch Whiskey was of the blended variety which Dewar’s hospitality aside is on par with the tongue burning taste of Robitussin. However, we paid a little extra and were treated to the good stuff as in single malts and boy was that palate opening. In fact, I was able to buy a 21 year old Aberfeldy stateside that we had enjoyed in the Highlands.

Scotland you have us hooked.

This is a text widget, which allows you to add text or HTML to your sidebar. You can use them to display text, links, images, HTML, or a combination of these. Edit them in the Widget section of the Customizer.

This is a text widget, which allows you to add text or HTML to your sidebar. You can use them to display text, links, images, HTML, or a combination of these. Edit them in the Widget section of the Customizer.
Loading Comments...